A World Mission Rosary: Begging for an End to Violence 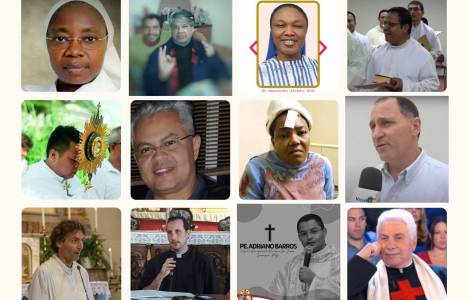 Fresh on the heels of the New Year’s news that Auxiliary Bishop Moses Chikwe, of the Archdiocese of Owerri, Nigeria and his driver Robert Ndubuisi had been released by their kidnappers unharmed, came another report through Fides, the news agency of the Pontifical Mission Societies at the Vatican. On January 8th, armed bandits seized Sister Dachoune Sévère, of the Little Sisters of Saint Thérèse of the Child Jesus, in Port-au-Prince, Haiti. Through the grace of God and prayers of many, Sister was released two days later and is back safely with her community.

Lest readers think that violence is only perpetrated against “official” missionaries for living their faith, add to this miserable list the case of Sheeza Maqsood. This sixteen-year-old Christian Pakistani girl was kidnapped at gunpoint from her home by four men. Sheeza was repeated assaulted and tortured for days and forced to marry one of her captors under threats of violence against her family. The brave girl was able to escape after 42 days and was reunited with her family.

We join Christians everywhere who rejoice in the safe return of these survivors; they represent many others, however, who were not as lucky to escape with their lives.

Each year, Fides publishes a dossier that tells us how many missionaries were killed in service to our Church. They put 2020’s count at twenty: eight priests, one religious man, three religious women, two seminarians, and six lay people. Two of the lay people were members of Nicaragua’s Missionary Childhood Association. Lilliam and Blanca González were sisters, ages ten and twelve.

In South Africa, Father Jozef (Jef) Hollander, OMI was discovered dead, bound hand and foot, in his rectory. Since Father was known to have little money and to use what he did have for his people, his bishop does not believe it was a robbery.

The lifeless body of seminarian Zhage Sil was found in a ditch on Christmas Eve in the Indonesian province of Papua. Sil was part of a movement of young Catholics who advocated locally for justice, standing in opposition to racism against the Papuan people.

Father Roberto Malgesini, of Italy, was known as “the priest of the marginalized.” He was stabbed and killed by a homeless man to whom he ministered.

It seems only Oceania escaped loss of life in our faith’s name.

Last week, I wrote about a very different kind of World Mission Rosary – one of New Year’s hope. This week’s multi-continent list begs for prayers – for the repose of many souls and for an end to all violence.