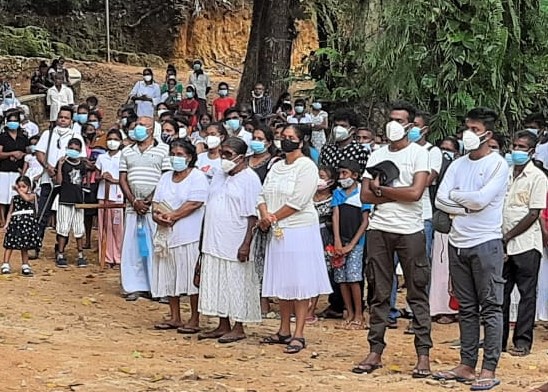 Here in the United States, we’re starting to breathe a little easier. According to the Centers for Disease Control and Prevention (CDC), the cases of and deaths from COVID19 across our country are on a downward trend. While we still have a ways to go, we can be grateful for the extraordinary work done by scientists, hospital workers, first line responders, grocery store workers…the list goes on.

We cannot, however, let our guard down. We need only to turn on the news, pick up a paper, or go online to see how easy it is to go backwards. Some countries are near catastrophe. Their hospitals are overflowing, there is not enough oxygen, and people are literally dying in the streets.

Most of these countries are in the missions.

In some of our world’s poorest countries, where the healthcare infrastructure was already limited, COVID19 threatens to break the backs of the underfunded systems, ill-prepared to handle anything on this large a scale.

With this in mind, we were asked by Pope Francis to establish a COVID19 Emergency Solidarity Fund. He asks all who “are able and desire to help to contribute to this fund through The Pontifical Mission Societies.” The Fund is acting as a faith-filled safety net in the missions.

In the African island nation of Madagascar, well-known for its “survival economy”, the situation has become more drastic. Shutdowns have blocked farmers and small traders from bringing their goods to market, making them unable to provide food for their families. Through our Emergency Fund, they’ve received help for food and medicine. Catholic schoolteachers have been without pay since March of 2020 because of school closures. We’re subsidizing their basic needs as well.

In Columbia, mission priests working with indigenous people rely on small offerings from the faithful to support themselves. Due to the suspension of Masses and all religious events, they are cut off from their flock. Their Vicariate – think of it as a place that will some day “grow up” to be a diocese – has no resources to provide for them. Our Emergency Fund is providing food and fuel to the 10 priests who must cover an area of 22,000 square miles to bring the sacraments to the faithful.

There is still so much more to be done.

It is critical that we stand in solidarity with our brothers and sisters in the missions. Theirs will be an unimaginable human tragedy if they must endure it without the Catholic Church’s support.

We prayerfully ask for your help.