Joyful Service Given with Love. 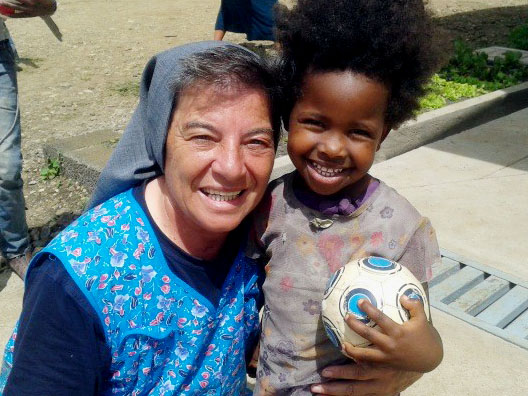 Growing up poor in Caravaggio, outside of Milan, Italy, is what Sister Rosario Assandri credits with leading her to a missionary vocation. In an interview with our Vatican Office, Sister spoke of her desire to further her education after primary school – she loved to learn! Sadly, there was no school nearby and her family could not afford the fees to send her to a distant one. Sister looked for a job to pay for her studies.

The Salesian Sisters of Melzo were hiring what they called “daughters of the house”, girls to do housework at the convent. The girls were also given the opportunity to attend school. Here was her chance!

Rosario did not go to the convent with the idea of becoming a sister. She worked hard, enjoyed her schoolwork, and loved to play. Looking back, Sister says, “The goodness and the joy of those nuns won me over. Seeing those nuns playing with children was it! I asked to become a nun. Once I became a nun, I did everything with a lot of enthusiasm.”

Sister has been on mission across the African continent for 32 years. First, she opened an orphanage in Kenya. After a stop in South Sudan, Sister Rosario moved to Ethiopia, about 100 miles southwest of the capital city of Addis Ababa. She states, “Here, we have no schools. We offer children, young people, and women the possibility of a place to find hospitality and recover from trauma or improve education. Women are offered the opportunity to learn a skill such as a sewing or baking. We provide young people with the joy of sport, especially soccer, trying as much as possible to keep them off the road, where there is danger.”

Sister Rosario’s missionary life has not been without personal hardships. At one point she fell ill from cerebral malaria, a very dangerous form of the insect-borne disease. Because her order was able to fly her home, she was received treatment and returned to her mission after nine months of hospitalization. She knows that the people she accompanies on their journeys of faith and struggle are not so privileged. “I therefore returned to the mission with the decision not to waste more time and energy. I came back with this awareness: I came to lend a hand to these poor people, and with love, this is all I have to do.”

May we all take a page from Sister’s book and joyfully use the talents God gave us to lend a hand to others and do so with love.